Photo of Steve from 2013 at his favorite coffee shop, Jack's Stir Brew 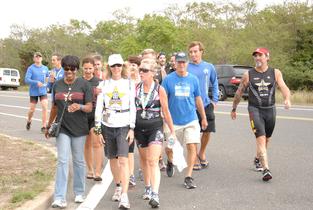 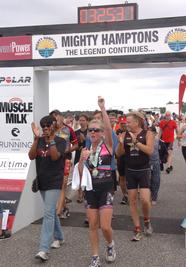 September 20, 2015 was the 34th annual running of the Mighty Hamptons Triathlon, one of the oldest triathlons on the east coast. Steve created his event company in 1993 to save this historic event. Once again, this event has been saved in 2015 as friends of Steve purchased his event company and are committed to the event's longevity and Steve's vision. They have also renamed the event to the Mighty Hamptons Steve Tarpinian Memorial triathlon. On that day, I participated in the race as part of a relay team to honor Steve.  Jeremy Penny did the swim leg, Natalie Penny biked and I did the 10K walk. These photos are of me finishing the race, surrounded by people who truly respected Steve and were paying him tribute. It was a priceless moment I will always treasure. Photos courtesy of Island Photo, Inc. 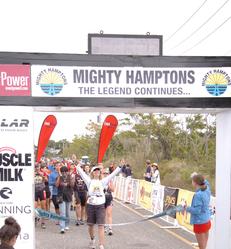 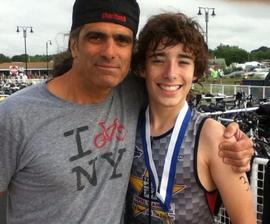 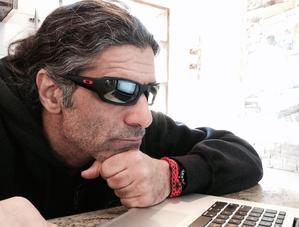 "Steve, spirit of hope and joy, and a bit of a thrill seeker, was always excited to come up with ways to spread the fever of fun in training and events as well. At the TrIslip event (a super sprint triathlon held in Islip, NY), a good number of high school age athletes entered to compete, and Jeremy Penny was one of them. Steve usually designed the line up of swimmer's waves for the staggered start of athletes with factors such as safety, competition and fun in mind. In 2012, Steve decided that the high school wave would lead off to get the race underway. Even though he knew it was unlikely a high schooler would be the overall winner, Steve thought it would be a good experience for the youngest competitors to get a taste of being the leader in the swim and onto the bike, and also to see the overall winners pass by. Jeremy was given this moment as a 9th grader to feel the thrill to be first out of the water and be the lead cyclist behind the lead vehicle. For this, and many other fun experiences we shared with Steve, we are forever grateful."

Steve also gave me this 'race leader' experience. Since I don't swim or run (just bike, and I am very slow at that), never in my life could I ever be the leader of a race. That was until a few years ago when Steve was my swimmer in a pool triathlon relay. Of course, being the fast swimmer he was, Steve was first out of the water, giving me a head start on the bike course. For about ten seconds, I was the race leader, with the lead vehicle in front of me. An experience I will always cherish that was a little gift from Steve.