Final resting place for the remains of Steve's ashes.

Every year, XTERRA offers a sunrise Hawaiian cleansing and rejuvenation ceremony,  (Hiuwai and E ala E) the Friday morning before race day at the swim start location.  In all the years Steve and I went to Hawaii, neither of us ever partook in this ceremony, so this was a first for me.

I was introduced to Clifford Nae'ole, a Hawaiian cultural advisor who conducts this service.  Before the ceremony, he spoke about the glass half full/half empty scenario and how the Hawaiians always say the glass is full.  This is because the glass contains half water and half air, both of which are necessary to sustain life.  The Hawaiians are much like the native Americans in that they revere nature and respect it.  Steve and I both loved this about those cultures.

Not having a specific  purpose for it, I had taken the small urn with me to Hawaii that had the final remnants of Steve's ashes.  Some of his ashes are buried in Shelter Island, a place he loved and took refuge in many times and I had also spread his ashes at the beach at the end of Navy Road in Montauk, one of Steve's favorite secret swim spots where he held the swim portion of his Montauk triathlon camps.

Clifford was told of Steve's story and at the ceremony, he  gently guided me to the beach and showed me a spot where the currents were diverging to spread the ashes.  Clifford told me to be sure to rinse the little urn with sea water.  As I reached down to do this, the ocean swirled at my feet and a strong  wave swept the urn out of my hand and took it out to sea.  It all happened so fast and as I looked at Clifford with tears in my eyes since I could not retrieve the urn, he told me; "Let it go, it was meant to be", and so I did.  Steve loved the water, loved Hawaii and loved this race, so it was a fitting resting place for Steve's  final remains and the urn. 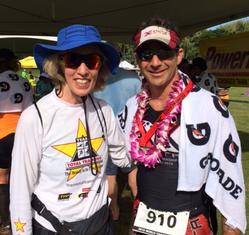 This video was shot Friday night at the XTERRA  Night of Champions dinner.  I had no idea the organization was going to honor Steve until Friday morning.  I was just so thankful that Janet Clark, President and Tom Kiely, CEO of XTERRA authorized my Slipped Away bookmarks being placed in athlete goodie bags and for also giving me a table at the expo to promote the book.  On Friday morning, Janet asked me if I would go onstage that night as they were going to pay tribute to Steve.  Whit Raymond, the dinner emcee and voice of XTERRA and 20 year announcer at Ironman Kona (also a triathlon legend in his own right)  told me that day he didn't know if he could bring himself to tribute Steve without losing it.  I have come to realize that Steve's passing has had such a deep and sincere affect like that on so many people.

Steve loved coming to Maui every year for this event, not only for the beauty and challenge of it, but also because it is such a well run event.  Steve carried with him to his own event company some of the things he loved about XTERRA.  The XTERRA organization respects and acknowledges all the athletes, not just the top finishers.  In addition, the care, passion and love for what they do was so evident in the XTERRA staff and, although they were busting their butts, it was obvious they loved what they were doing and were having a great time.  There was such a great sense of camaraderie.  It was so apparent to me that these traits came from XTERRA top management and flowed down to the staff. This night was such an amazing experience for me.  I was so humbled and honored that XTERRA took the time to acknowledge Steve.  This gift that the XTERRA organization gave Steve and I will be another memory that I shall always cherish.

Saturday morning before the triathlon is the Maui XTERRA 5K/10K trail run.  Every year XTERRA offered this event, Steve and I would reverse race day roles.  I would walk the 5K and he would be my sherpa , carrying my 'stuff' and being at the finish line to cheer me on.  Payback is a bitch :-)

Cheryl B., a good friend of ours who lives on Maui always met us on Saturday and would run either the 5K or 10K.  Steve would be resting up for his off road triathlon the next day.  This year, Cheryl walked the 5K with me and I was so thankful for her presence.  The 5K/10K course covers part of the triathlon run course and feels  like it is entirely uphill.  It was also extremely hot with the last few hundred yards before the finish consisting of deep sand on the beach.  And the triathletes run 6.5 miles on this course after swimming a mile and mountain biking 20 miles???   jeez. About halfway through the 5K this year,  as Cheryl and I rounded a corner finishing an uphill climb; I looked up and saw another hill we had to scale.  For the first time ever doing this race,  I had to stop and sit my ass down on the course as I did not have the strength to continue.  I thought I was going to barf.  Cheryl patiently waited for me and helped to hoist me up after a few minutes and we finished the race together, Steve's prayer card in my hand.

I am back from XTERRA in Maui!

As I said in a previous post, my worst nightmare about this trip was sitting in the expo and no one was coming to my table to talk to me about Steve. Well, that is exactly what happened. Sometimes I would go for hours without anyone stopping by, or if someone did stop by, they would ask me what time the race starts on Sunday. I should have known better. When an athlete is checking in for a race, especially at this event, they are so focused on getting their race packets and test riding the course. Steve was no different. He was in and out of the expo as soon as he got his race info; there was no time to wander around and check out anything else that might be going on.

However, I soon came to realize what was really important. It was the quality, not quantity of XTERRA connections/experiences I would have while in Maui. I met some amazing people that gave me tremendous support and showed me so much kindness. I will share my great experiences over the next few days in my Facebook postings.

On Thursday, the first day I was set up at the expo, Jay Heller came up to the table and introduced himself. He had done this event 17 times previously and just recently found out about Steve's passing. He was visibly saddened. Jay shared with me a story about his encounters with Steve at this race over the years. For about 4 or 5 years, Steve would be ahead of Jay, coming out of the water before him, with Jay eventually catching Steve on the bike. They would ride the climbs together for a bit and commiserate about their shared misery of riding this course and the oxygen deprivation they were suffering with.

Jay asked me if there was anything I had of Steve's that I would want him to bring on the course with him. I gave Jay Steve's prayer card. He said when his Mom passed of breast cancer a few years ago, he dedicated his race to her and rode with her prayer card on his bike. Jay did the same for Steve this year at XTERRA.

I was so touched at the kindness of this man that I never met. I could see why Steve and Jay would connect. They both love this race for its challenge and beauty and neither of them cared about having a fast time or placing in their age group. It was such a great experience meeting Jay and it is a priceless memory for me. I will be forever grateful to him for sharing his Steve experience with me and also for giving Steve one more ride with Jay on the Maui XTERRA course that he loved so much. 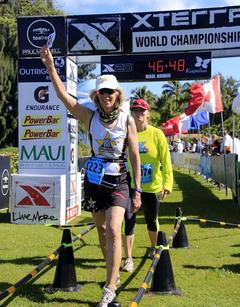 Jay Heller and I after the race 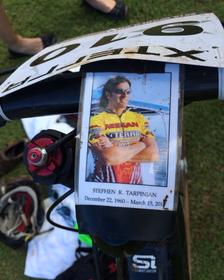 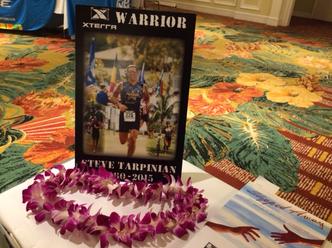 Friday morning I arrived at my expo table and I saw that someone placed a flower lei at the base of Steve's photo.  None of the staff knew who put it there.  It was such a simple gesture, but it spoke volumes of kindness and support to me. 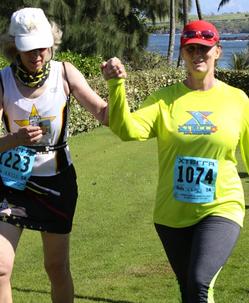 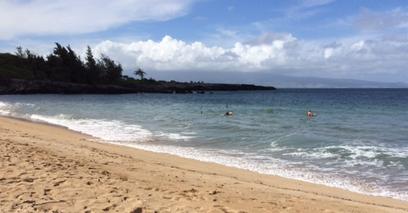