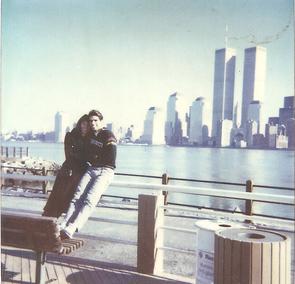 I imagine September 11, 2001 is a day people will always remember what they were doing the moment they heard the tragic news.

​This photo of Steve and I was taken in 1991. We were so happy in this photo, oblivious as to what the future held for both Steve and I; the tragedy of September 11, 2001 and his suicide on March 15, 2015. These are moments in my history that will forever live on in my memories, never to be forgotten. My heart still aches for all those who were lost in the World Trade Center terrorist attacks and for those who loved them.

September 16, 2001 would have been the twentieth consecutive year of the Mighty Hamptons triathlon. In 1993, Steve purchased this event to save the historic race from extinction and created EventPower (which eventually built the landscape for the sport of triathlon on Long Island). On the morning of 9/11/2001, Steve was at home, preparing for the NYC athlete check-in scheduled for 9/12/2001 at a running store in the World Trade Center complex. I was also working from home and got a phone call from a colleague, telling me to turn on the TV as one of the twin towers was struck by an airplane. My first thought was that it was a small misguided Cessna that had clipped the building. As I put on the TV and saw the magnitude of what was happening, I called for Steve to watch the reports and both of us broke down and cried. As I write this today, fifteen years later, I still sob over the memory of this day.

The surreal events that transpired after the attacks were unprecedented in my lifetime. From what I remember, the Long Island Expressway (one of the major east-west highways on Long Island) was closed to all except for vehicles related to the rescue/recovery. Air travel into and out of the U.S. was shutdown. We were worried about Steve's German business partner and good friend who was flying into JFK on 9/11 and did not hear from her for several days as her flight from Germany was diverted to Gander airport in Canada. For weeks after, Steve and I would lay awake at night, hearing the fighter jets flying over Long Island, wondering if they were in pursuit of another plane taken over by terrorists.

Steve had to make some serious business decisions (as did many others in light of the impact this tragedy had, especially on those in the NY metro area) regarding the Mighty Hamptons. There were over 800 athletes registered. Most of the registration fees had already been spent (food, salaries, athlete goodie bag items, etc.). The decision whether to proceed or not proceed with the Mighty Hamptons was such a struggle for Steve, since our elected officials advised everyone to go on with their lives in spite of this monumental catastrophe. How could we continue on as if nothing happened in light of one of the most devastating events to happen to our country in our lifetime?

Ultimately, Steve decided to cancel the event and communicated to all the registered athletes on 9/17/2001:
- All purchased supplies for the event (tshirts, food, energy bars etc.) were donated to the rescue effort
- All unused funds collected from entry fees were donated to NYPD and FDNY Widows and Children's Fund, with all of the registered athletes' name listed with the donation
- A memorial was held on what would have been race day with over 100 people in attendance along with a non competitive swim/run event. First to the finish line was a young athlete whose firefighter uncle perished in the recovery efforts. The athlete dedicated his efforts to his uncle.
- The three registered athletes who died on 9/11/2001 are listed as the Mighty Hamptons Champions for 2001

As with most things in life, there is always a vocal minority that express their displeasure with decisions that may be made and Steve's decisions on how he handled the 2001 Mighty Hamptons were no different. However, the vast majority of the athletes applauded how he handled it and many did so in writing. Steve saved some of these letters and I found them with his "treasured belongings" after he passed. I think he saved them to remind himself that he did the best he could. However, because of Steve's sensitive nature, he still felt he could have done better. Alas, there is no handbook on the best way to handle a scheduled triathlon in light of something as horrific as the World Trade Center terrorist attacks.

One of the very inspiring letters Steve received was from a Mighty Hamptons registrant who volunteered to help out in a Newark warehouse where a lot of donations were being delivered. Her job was to sort through the boxes and organize the contents. She came across some long sleeve shirts and a bunch of them caught her eye as they were the Mighty Hamptons Finisher shirts that Steve had donated. She said in her letter: "It made me feel like we're all trying to help out no matter where we live, we're all affected and we're all connected." That statement personifies the message Steve was trying to get across with his decisions regarding how he handled the 2001 Mighty Hamptons. Steve so wanted to do the right thing out of respect for all those that died and their grieving loved ones.