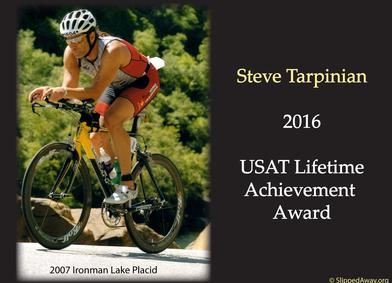 In 1991, Steve and I vacationed in the Cayman Islands. We sat through a 2 hour timeshare presentation so we could get a free scuba dive trip.

I knew I was in trouble when I saw our dive boat coming into the beach to pick us up.  There were huge (in my mind) breaking waves that the boat would have to cut through to get us to our dive destination.   Luckily, we did get through it without incident. (I had to close my eyes as we went through the breakers).

Finally, the boat gets to the dive spot and there are white caps and strong currents.  Steve and I jump in the water and as I looked around, I saw the tropical fish crashing into the reef from the currents.  As I looked up to where the boat was, I could see the dive platform in the back of the boat lifting out of the water then smacking back down from the wave action.   I am thinking to myself, "how am I going to survive this dive and will I ever be able to get back on the boat?"

Then, I realized, I was with the best dive buddy ever.  Steve was a lifeguard, a  great swimmer and he loved me.  If anyone could get me back to terra firma in one piece without drowning, it was Steve.  He took me by the hand and we had a great dive.  When it came to getting back on the boat, Steve pushed my butt up onto the dive platform, in the midst of the whitecaps and then he hopped back on.

The Cayman Island trip  was not the only time Steve had to bail me out on a dive trip.  I remember on one beach entry scuba dive in Kauai, he  had to drag me by my tank back onto the beach because I was so exhausted from diving against the current.  Another time in the Florida keys, I was so seasick from the boat trip, he had to pour me in my wetsuit, strap on my dive gear and toss me overboard (seasickness usually dissipates once under water.)

Sometimes I wonder how Steve put up with me LOL.

The RJA Memorial Mighty Montauk Triathlon was founded in 1982 by the late Robert J. Aaron. His widow, Merle continues this race each year in Robert's memory and to raise funds for the Lustgarten Foundation for Pancreatic Cancer Research. Robert and Merle were/are very good friends of Steve Tarpinian and myself for many years. This race was Steve's all time favorite triathlon and he did it every year since its inception in 1982.

Steve had a penchant for the 'old school' way of doing things and loved that his good friend Robert's spirit shined all over this race since Merle has maintained almost all of Bob's creative beauty and ideas in the event. Things like driftwood course markers, no relays, no athletes under 18 etc.

I clearly remember the first time Steve did this race in the early 1980's; he was the first athlete out of the water to the transition area with the bikes laying flat on Montauk Highway (no racks). Being the dutiful trathlon 'wife' i was, to preserve Steve's modesty, I held up a towel while he changed from his Speedo swimsuit to bike shorts. This was the early days of the sport of triathlon; no wetsuits, no aerobars, no lace locks etc.

At the 2017 race, I was so happy to see members of Airborne Tri Team (ATT) , participate in this event, doing the same course that Steve loved to do for so many years. It was such an honor for me to see ATT members gather at the finish line to do 22 pushups to honor their veteran brothers and sisters lost to suicide with the hopes of raising awareness of the alarming numbers of veterans who take their own lives on a daily basis. Then they add an extra push up in memory of Steve and all the other civilians lost to suicide. Members of Airborne Tri Team are still serving their country, just in a different way.

At the Florida Ironman, Steve lost his hair tie while swimming and when he came out of the water after the first loop of the swim and before he re-entered the water to complete the second and final swim loop, he spotted me on the shore and asked me for a rubber band. Regrettably, I had none so he had to complete the race with his long unruly locks flowing wildly. Steve shared with me after the race how many of the beer drinking spectators in the bars along the run course were yelling out to him "Yo Fabio!" . (For those of you too young to know of Fabio , he is a long haired Italian-American actor/fashion model well known in the 1980s and 1990s).

Although Steve was not able to enter every US based inaugural Ironman event, he did complete four of them (1999 Lake Placid, 1999 Florida, 2000 California and 2005 Arizona).Steve was an Ironman in every sense of the word. In just under a year, between August 1999 and July 2000, Steve finished four Ironman distance events (2 Lake Placid, 1 Florida and 1 California). 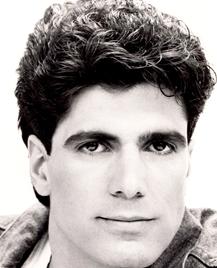 Airborne Tri Team (ATT) will always have a special place in my heart.  ATT has honored Steve by including his memorial star logo on their triathlon racing gear.

In July, some members of Airborne Tri Team participated in the 2017 Ironman Frankfurt.  Paul Milazzo, while always a great runner, only started doing triathlons recently since he joined ATT in 2016.  This was his first Ironman distance (2.4 mile swim, 112 mile bike, 26.2 mile run).  Paul had an amazing race with a 1:04:53 swim, 6:06:18 bike, 4:17:52 run and an overall finishing time of 11:47:34. I told him he crushed the swim and kiddingly asked him if he was drafting off Steve's feet LOL.  Paul's response: "I feel like I was. I was thinking about him throughout the course.".  Steve continues to inspire even though he is no longer here 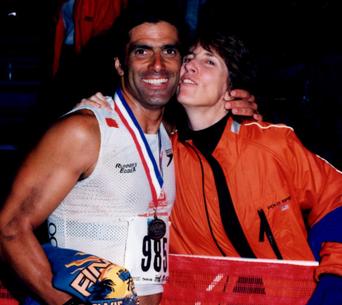 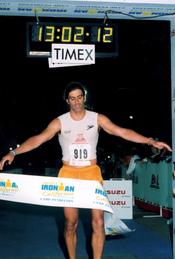 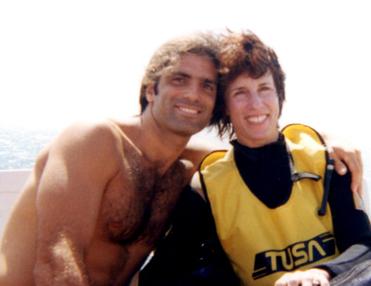 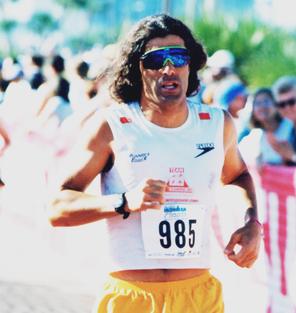 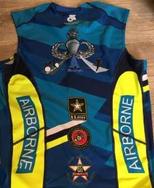 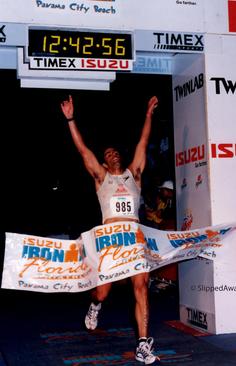 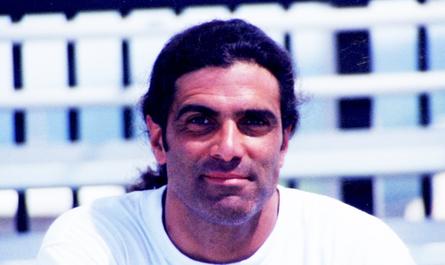 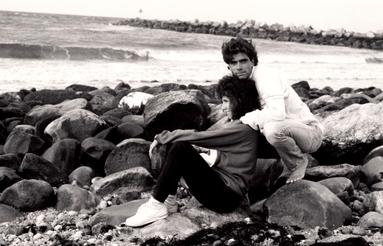 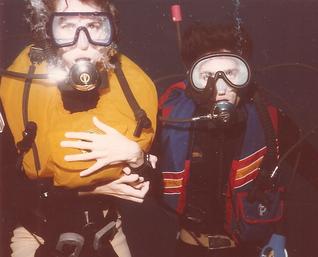 Back in the mid 1980's, Steve and I were trying to decide if we should leave our roots in Long Island and move to the San Diego area. The sport of triathlon was growing and San Diego/North County was a triathlete training mecca and where many of the top professionals lived.    Steve and I vacationed several times in San Diego and were always drawn to its beauty and healthy vibe and lifestyle.

I was working for IBM at the time and had interviewed for a position at their San Diego branch.  The job was mine if my current management would release me.  Steve was trying to decide which direction his entrepreneurship would take him so we drove to watch a sunset at Jones Beach (where we first met and where Steve was a lifeguard) and reflected on the pros/cons of leaving New York for San Diego.

It was a gorgeous summer sunset that night and as we sat in the car, parked at West End 2, I clearly remember us gazing into each other's eyes and saying how beautiful Long Island was and that we really did not want to leave the place where we both grew up.  Shortly thereafter we bought our home in Wantagh where we happily lived for many years.

I often wonder if we had decided to move to San Diego back then, where Steve's career would have taken him and what the triathlon landscape would be like on Long Island today.

In February, 2017, I was honored by Project9line with the Sgt. John Barbato award for the Slipped Away proceeds donated to their cause.  At the time, I did not post this since I felt self conscious taking credit for something that was the result of Steve Tarpinian's story.

In June, 2017, I received this formal citation in the mail and I realized that in addition to  sharing this award with Steve, I also want to acknowledge that my contributions would not have been possible without the support of those who purchased Slipped Away.

It is truly an honor to be acknowledged by our veterans and to be an honoree of the John Barbato award.  Barbato, 27, survived a suicide bomb attack while deployed in Afghanistan in 2008 and  died in 2012 at an inpatient clinic at the U.S. Veterans Affairs Medical Center in Northport.

The family  said John had been at the hospital receiving treatment for severe post-traumatic stress disorder and that the cause of death had not been determined.

I am humbled by being an honoree of this award and I thank you all for your past and continued support  of Slipped Away. 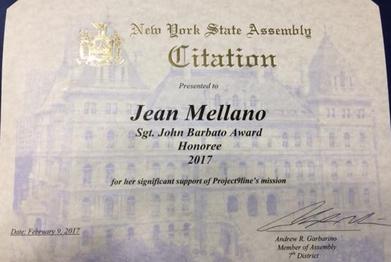 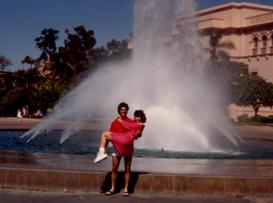 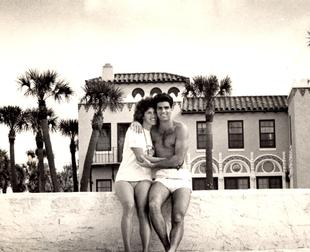 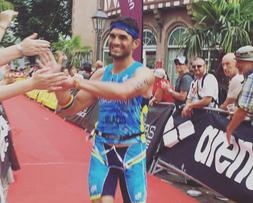 Happy early Anniversary Steve! (We always celebrated August 29th, the day we met and fell in love at first sight in 1981).

Today I give Steve an early anniversary present.

I had the opportunity to audit an acting class workshop given by a well known actor/director. Steve was a HUGE fan of this person and I am sure Steve would have loved to have been a class participant. Many of you may not know, Steve took acting classes and loved the film industry and hoped someday to see the story he wrote about his Armenian grandmother come to life on the big screen. As such, he had a big thirst to learn anything he could about the trade.

Steve has always said, "there are no coincidences", so when this opportunity presented itself to audit the class, I jumped on it, not knowing where it would take me. I know why Steve held this man in high regard; it was amazing to watch him pull out true emotions from the acting students doing their monologues. After the class, I told him briefly about Steve and asked him if I could give him a copy of Slipped Away. Of course, I started sobbing when he graciously said yes. Then he gave me a big hug.

I don't know if he will ever get the chance to read the book, but the fact he accepted it from me was a huge honor. I am sure Steve would be thrilled that someone he highly respected would have an interest in his memoir.