Slipped Away Through the Lens #7 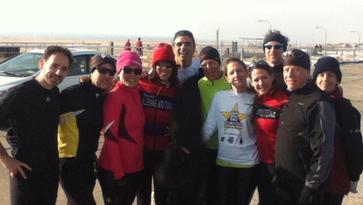 Steve loved food and left no crumb or scrap uneaten on his plate, or my plate either for that matter. As my best friend Judy said to Steve and I once; "Eating makes us happy". In the early 1980's, when we first met, Steve would always try to get me to taste new foods since my diet mainly consisted of non fat pineapple yogurt and chicken cutlets. One time, we were out for a ride in Steve's TR6 with the top down on the North Fork and we stopped at The Barge Inn take-out store front in Southold so Steve could get his favorite fried flounder sandwich. Although I didn't eat or like fish at the time, Steve loved to share his food and he kept trying to cajole me into taking a bite. Finally I conceded and it was so delicious, I almost finished the sandwich, leaving hardly any for Steve. Through the years, even at the risk of losing the rest of his meal, Steve would still always try to convince me to try something he was eating. He never learned his lesson and there were countless times he missed out on eating his entire meal, but, he was so happy I tried something new and liked it.

A cave cricket  showed up in my basement today (10/13/15) and Steve is not here to lecture it :-( So, I repeated what Steve and I did a few years ago; I scooped it into a plastic container and released it outside at the end of the driveway.

Cave crickets; for those of you who don't know what cave crickets are; they are big and ugly and jump at you, but they are harmless.  Starting in 2013, Steve and I would see a few in the basement and we honed our craft at catching them with a plastic container and lid, then released them outside.  We toyed with the idea of tagging them or marking them as it seemed they kept coming back.  We even walked down to the end of the block to release them near the sewer since they liked cold and dark places and we figured it was far enough away that they wouldn't come back.  But they did come back and started showing up on the main floor, so Steve decided to have a discussion with them (although not with a microphone like in the photo).  He proceeded to go down to the basement and gave an eloquent speech to them about how they need to stay out of our space (as kindly and gently as Steve does).  Believe it or not, we didn't see cave crickets for weeks after that. 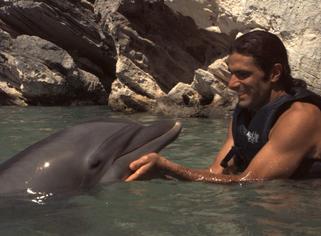 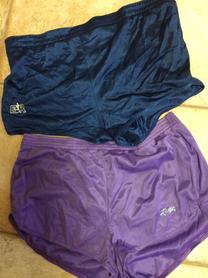 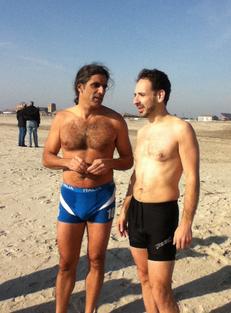 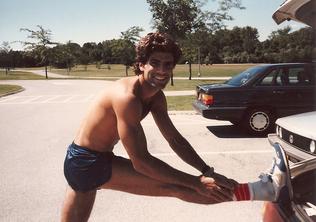 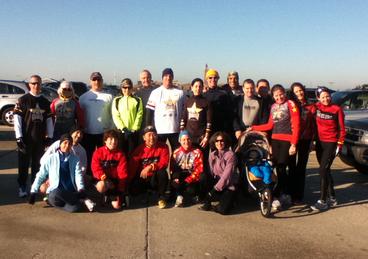 In "Slipped Away", I tell the story of how Steve and I met, but not what we were wearing. I was a roller skater back then and I was wearing purple Dolphin shorts. Steve was running and wearing blue Bill Rodger's running shorts. These shorts held such a special place in our hearts and signified such a wonderful memory, I had to save them. The photos of Steve and I were taken in 1985. We would meet at Cedar Creek Park and do our respective workouts on the bike path to Jones Beach. I would skate and he would run. Sometimes, to intensify his run workout, he would pull me while I was on my skates behind him with me holding on to a rope wrapped around his waist.

Rather than celebrating on New Year's Eve until midnight and beyond,  Steve liked to plan an athletic event on January 1st  for either himself or for Team Total Training to encourage starting off the year with a healthy activity.

One of Steve's more recent rituals in 2011 and 2012 with Team Total Training was to organize a New Year's day run and "polar bear" swim at Jones Beach. 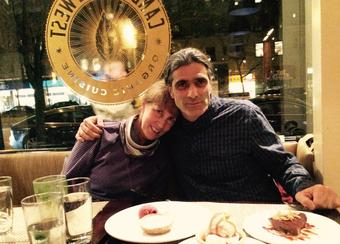 Steve cleaning my plate; he loved my blueberry pancakes. 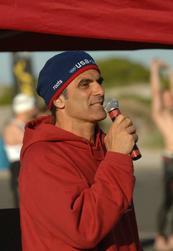 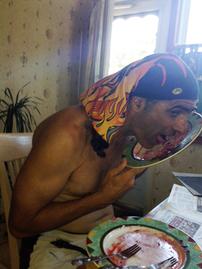 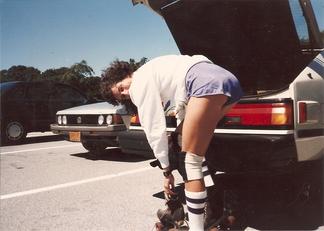 Jan or Feb 2015, last photo of Steve and I together before he passed. Of course, it was at one of our favorite restaurants.