Back in the 1980's and 1990s, Steve traveled a lot with his bike both for training and racing.  During that time, airlines were not very focused on generating additional revenue by  charging for over sized luggage, especially bicycle cases.  Steve, being the frugal, ingenious person he was, purchased an unorthodox looking bike case and put a sign on it that said "scientific apparatus".  He had no problem convincing the airline check in agent that he was a scientist travelling to a convention with his equipment.  More often than not, the agent believed him and must have been impressed since Steve was not charged  any additional baggage fees.

This bike case served Steve well and for many years whenever he came back from a trip with it, he would fill the extra spaces in it with some of our favorite tasty treats that we could not get in New York.  Case in point, Oregon Herb bread and whole wheat cinnamon buns from one of our all time favorite eateries, Great Harvest in Boulder, Colorado. Steve and I always looked forward to our visits to Boulder, which usually revolved an "eat around" with Great Harvest being our first stop (and the last stop to fill up the bike case before we returned home). 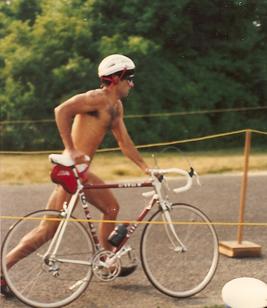 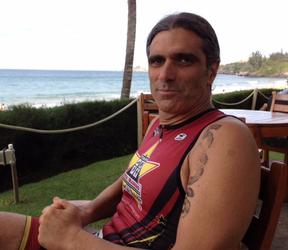 Sean D. knew Steve from Jones Beach lifeguarding days back in the 1980s. Another lifeguard, Jim R. saw on Facebook that I was going to Maui and he reached out to tell Sean since he knew Sean was racing Maui XTERRA this year. The lifelong relationships and bonds the lifeguards have is amazing and even though they may have lost touch over the years, that sense of caring and camaraderie never goes away. I am so thankful for the support these lifeguards have given me, similar to how the FDNY and NYPD rally around the families of those who have passed in the line of duty. Sean and Jim have exemplified that kind of support in how they have reached out to me. Sean and his significant other Shari, saw to it that I did not eat alone Saturday and Sunday night in Maui. Sean also honored Steve by taking his prayer card with him on the XTERRA course and by dedicating his race to Steve. Although I may have been lonely in Maui, I certainly was not alone and I am so thankful to Sean and Shari for their company.

Our favorite cinnamon rolls from Great Harvest that Steve brought home to NY in his bike case. 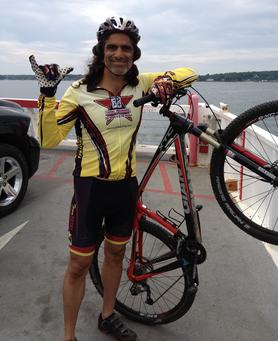 On Sunday, XTERRA triathlon race day, in Maui, as I was waiting for Jay and Sean (see earlier posts about their stories) to finish the race, I was sitting on the grass alone by the finisher's chute. A woman introduced herself (Natalie) to me and told me she did not know Steve and was not familiar with his name. However, she said she had read his story on the promotional bookmark XTERRA allowed me to include in the athlete's goodie bag and was so touched by Steve's story. Natalie then told me she had dedicated her race to Steve that day.

There were 3 people racing to honor Steve on that Sunday (Jay, Sean and Natalie), two people I had never met before and one that I met a few times years ago. The kindness and sensitivity of strangers overwhelms me at times. 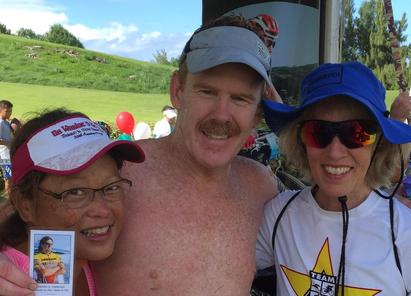 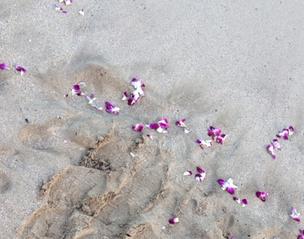 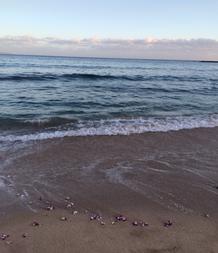 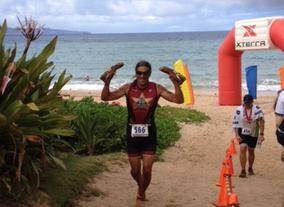 Tuesday after the XTERRA triathlon was my last full day in Hawaii and a real tough one for me.

In the group bereavement sessions I attend, we have talked about the pain of the "firsts"; the first time since our loved one passed returning alone to a favorite restaurant, vacation spot etc.   I remember the first time returning  without Steve to The Dock restaurant in Montauk.  Without him, it was not the fact that I was eating alone, it was the sight of the empty chair across the table that reduced me to sobs.   Going back to Maui alone brought another round of "firsts"  to me; eating Maui chips with a Coke alone, flying into Maui alone, walking through the host hotel alone; attending the XTERRA dinners without Steve and doing the 5K trail run without my "sherpa" waiting for me at the finish line.

I also experienced a different kind of "first" for me which was even more painful.  It was a first time for me seeking out a new adventure that neither of us had ever experienced before, either alone or together.  Steve and I always loved sharing our great adventures.

There is a very spiritual Hawaiian location a short hike from the hotel that has a labyrinth.  Steve loved labyrinths so I decided to take this little trek in his memory.  It made me sad that it was not something we could share together. In our previous visits to Kapalua for this race, we were not even aware of this location.  I believe if we had known about this site, we would have made the time to check it out.  But, as it always is with athletes, they need to rest their legs before a race and their legs are too tired after the race so we never bothered to look into doing any hikes while in Kapalua.

So, I walked the labyrinth alone and soaked in the beauty and peacefulness of the location and thought about the wonderful 33+ years of love I had with Steve.

Returning to Maui was a rollercoaster ride for me.  The highs of meeting  people who raced in memory of Steve as well as the wonderful XTERRA tribute to Steve are priceless memories that outweigh the lows of being so lonely and experiencing all my "firsts".  I have no regrets for going back to this place Steve and I loved so much.

Steve nearing the finisher's chute at the 2012 Maui XTERRA race, the seventeenth and last time he participated.

2010 Shelter Island ferry on a ride to Orient Point with me. 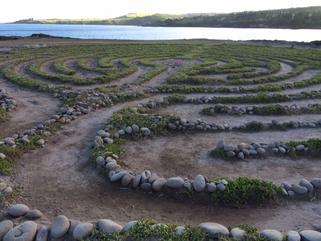 I wanted to bring a smile to people's faces and I also had fun putting this together.  I also found the video somewhat symbolic; tandem bike riding, flowers (Steve always loved to give me flowers, even for no reason), the ring, which Steve gave to me before he left for Sedona last year, the hair too long verse and clasping hands (symbolic of Slipped Away hands reaching for each other).

"I got flowers in the spring
I got you to wear my ring
And when I'm sad, you're a clown
And if I get scared, you're always around

Don't let them say your hair's too long
'Cause I don't care, with you I can't go wrong
Then put your little hand in mine
There ain't no hill or mountain we can't climb"

Happy Valentine's Day Steve,  I got you babe.... 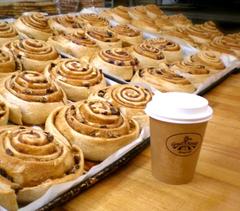 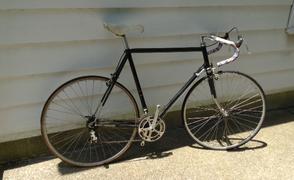 Steve after finishing the 2012 Maui XTERRA race, the seventeenth and last time he participated.

On Monday, the day after the triathlon, all was quiet at the resort as most of the athletes had already left or were in the process of leaving.  It seemed like it was just the honeymooners and I :-).   How many times in the past while Steve and I were having a wonderful time, was there someone like me in the background, who had lost the love of their life, wistfully gazing at us, trying to remember what it was like to be so in love and so happy?  Of course, this was not a thought that ever occurred to me while I was living those happy moments with Steve, but now it was haunting me.  I knew I had to stop thinking like this or I would have crawled back into bed,  so I decided to take a short hike along the coastal trail.  Steve and I would always perform a little ritual, without fail, either on Maui or Kauai every year we came back to Hawaii.  We would toss the flowers from our leis into the ocean and watch them drift away in the surf.   Although it was just me this year, it brought back such sweet memories.