Even though it has been over a year since Steve has passed,  not an hour goes by that I am not thinking of him.  Sometimes I smile at a memory, other times, it is more difficult when a situation (usually house related) arises and I wonder, "What would Steve do?"

Steve was a "critter whisperer".  Whether it was lecturing the cave crickets in our basement to stay out of our space, calmly dealing with the mice in our house (Chapter 5 of Slipped Away), or soothing a nervous Snoopy Bunny, Steve seemed to have such a connection with critters. I remember one time when we would try to go out our front door, some starlings would swoop down on us in attack mode.  So, Steve and I decided to use the back door and walk around the side of the house.  However, these birds still managed to find us.  One day, out of frustration, Steve took a broom  and ran out onto the front lawn.  As I watched, he was like a madman, waving the broom around, yelling (louder than a whisper LOL) at the birds to leave us alone.  Even though we didn't see them that day, the starlings must have listened to Steve since we never saw them again.

A "critter" situation happened this week when UPS left a package on my stoop that had chocolate babka.   When I went outside, I saw that the box had been torn apart and the babka was all chewed up.  I surmised it was the squirrel I have seen near the front of the house who was digging up my potted flowers.  So, I put the babka remains in the garbage pail on the side of the house.  The next day, I see a hole chewed right through the garbage pail cover.  Now, I know this babka is out of this world, but I never thought a squirrel would be so obsessed with it.

Since aggressive squirrels are not a good thing for a homeowner, I said to myself, "What would Steve do?"  It has been 2 days since I have seen any signs of the squirrel. I like to think that perhaps Steve had a heart to heart talk with him. :-)

In 2014, Steve wrote a note to himself about what he would like to be said at his funeral:

"Steve was a man who was compassionate and learned from his mistakes. He dared greatly"

I believe this to be so true about Steve. He was a spiritually beautiful, kind man and one of the bravest people I have ever known. He fought the brave battle against mental illness for years. Sad to say, in the end, for Steve, his fear of dying became less than his fear of living.

Steve prided himself in being an "old school" kind of guy and preferred to think of  himself as more analog than digital.  Whether it was his continued use of a flip phone vs. a smart phone or his preference to listen to the imperfect sound of a record playing, scratchy needle noise and all vs. the crystal clear recordings of digital music on an IPOD, Steve loved anything "old".   Steve and I always joked that he fell in love with me because I was older than him. When I was graduating high school, Steve was only in the fifth grade.

In many cases, Steve's "old school" way of doing things manifested itself when he believed that things we did in the past made perfect sense and there was no reason to change, update or upgrade.

When I wanted to put in a second bathroom in our little Cape Cod house in Wantagh so we didn't have to share our bathroom with guests staying overnight, Steve articulated that we both grew up in families of five people and neither of us were adversely impacted sharing one bathroom with four other people.  Eventually, Steve saw it my way when his use of the single bathroom was pre-empted by a guest in the middle of the night. 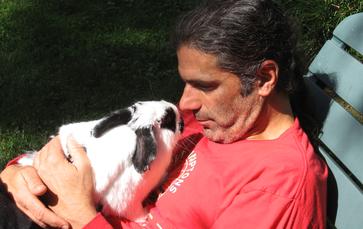 "Stephen Tarpinian ’79 (RIP) was one of the founders and primary promoters of the sport of Triathlon. He has been memorialized in a very moving tribute to his life and tragic death (on March 15, 2015) entitled Slipped Away. This memoir was written/compiled by Jean Mellano, Steve’s soulmate for some thirty years; the majority of the proceeds of the book are being donated to project9line.org, a non-profit organization that supports veterans with PTSD and depression."

Until 2008,  our TV setup consisted of a television with thirteen channel buttons and a top loading VCR with a corded remote.  If it wasn't for the cable TV remote, changing the channel would require one of us to get off the couch.

Sometime in 2007, our TV started emitting a colorful aura  when turned off which would remain on the screen for five to ten minutes after it was powered down.  It made me think we were entering the Twilight Zone.  Kind of ironic, since that show was from the days of black and white television.  At my insistence, since I was fearful that our old TV was breaking down and might catch fire, Steve finally conceded (kicking and screaming, I might add) to get a new TV setup with a DVD player.

And those "old school" doorknobs and doors from our house built in 1935?  I think I will keep them around for a while. 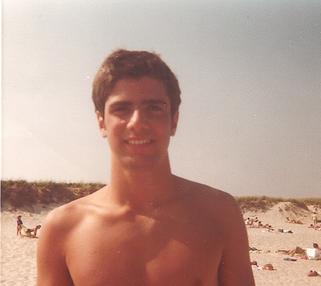 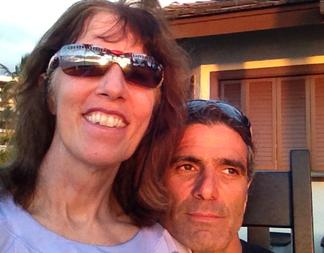 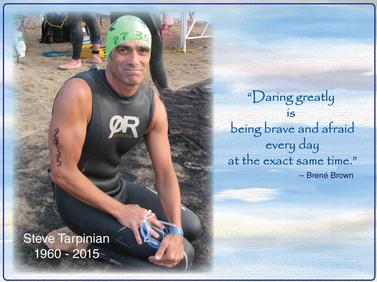 Wataru was a long time friend of Steve's. He was one of the earlier triathlon team members and also a key staff person at Steve's company's events for many years. In 2015, Wataru created a beautiful entry in an art journal and gave it to me. He wanted to join me at a Woman's Creative Circle art workshop where he was a special guest that day. I had no idea Wataru was going to paint this at the workshop and then give it to me. It is his interpretation of the photo on Steve's prayer card. Thank you Wataru for this wonderful memory of Steve. Wataru is in the back to Steve's right in the group photo, taken on a team training day at the site of the Mighty Hamptons triathlon in Sag Harbor.

This October 2012 photo of us was taken in Maui on the day we flew home to NY. We steeled ourselves for facing the aftermath of hurricane Sandy and it was early 2013 that Steve started Slipping Away. As I look at Steve's face in the photo and see his wistful look, it almost seems as if he knew of the tumultuous journey that lay ahead of him. 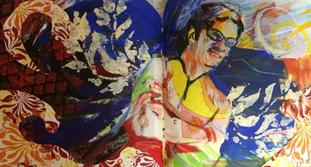 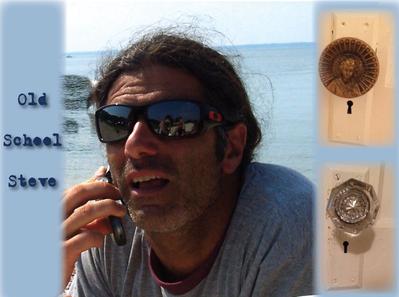 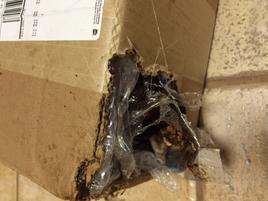 Thank you Airborne Tri Team for your 23rd pushup for Steve. It was an honor to do the pushups (even though my form sucked LOL) with these warriors.

For those of you who don't know, an average of 22 veterans per day take their own lives, hence, the significance of ‪#‎22pushups‬. Although the paths that lead our veterans to suicide are different than Steve's, the end result is the same, the tragic, sudden loss of a precious life and the loved ones that are left behind, feeling the horrible pain of loss, with so many unanswered questions.