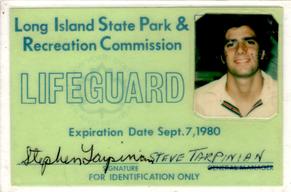 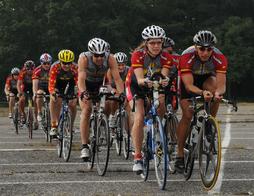 I recently found this photo of Steve teaching a Spinning class.  Without fail, for many Saturdays in the late 1990s or possibly early 2000s, Steve and I would drive 60 miles to Southampton so he could teach the morning Spin class at a local gym there.  Of course, we did an 'eat around' at some of our favorite breakfast spots after class (Tate's, Sip and Soda, Golden Pear, Hampton Coffee Company to name a few,  if my memory serves me correctly :-)), which I think is the real reason we took the drive LOL. 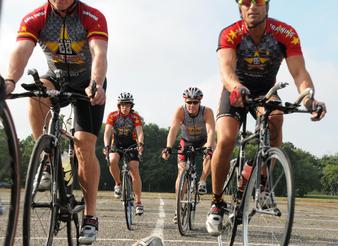 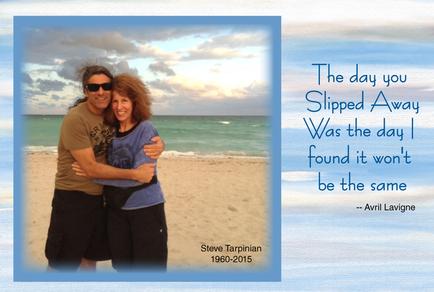 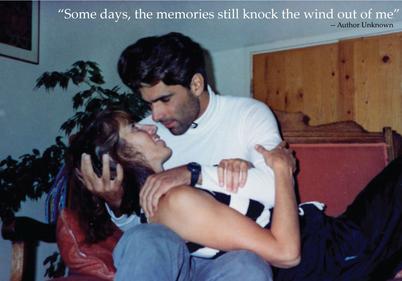 Steve was a casual kind of guy in his style of dress.  He was most comfortable in his board shorts  or workout clothes.  He hated wearing suits and ties and would do so only if it was required for a formal affair.  Even then, he would still complain about it.   :-)

Occasionally, Steve would make a fashion statement with some unique article of clothing and he would always wear it well.  Sometimes he ended up being  a trend setter as he did with his sport kilt.   Steve  loved wearing his sports kilt and he found it to be quite versatile.  He usually had it with him on training bike rides, but, Steve could also be seen wearing it during a race, either as a participant or checking out the bike course for one of the triathlon events that his company produced.  Steve was a sight to behold, his long hair flowing behind him with his kilt flapping in the breeze, causing many people to pause and wonder what he was wearing under his kilt LOL  Some of his friends adopted this both utilitarian and fashionable accessory and it was not unusual to see one of Steve's  training buddies sporting a kilt at one of their workouts.

The other photo is from a Team Total Training annual party and Steve is wearing his "pimp" coat.  He created quite a stir when he showed up in this coat.  Steve's friend Mike had made a coat like this for himself and Steve thought it was the coolest thing so Mike  made one for him.  Steve didn't get a lot of use out of it, but it was always good for a grand entrance and a laugh at a party. 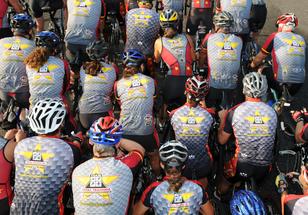 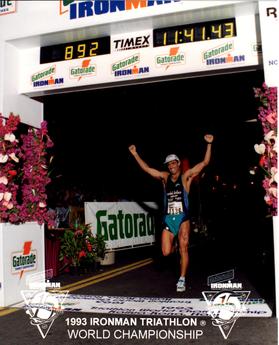 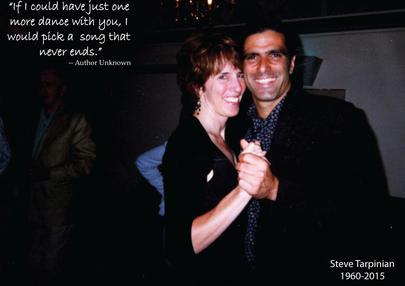 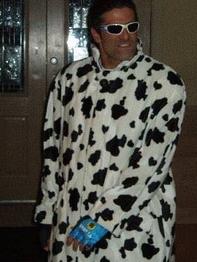 For many triathletes, the ultimate race is the Ironman World Championships in Kona (2.4 mile swim, 112 mile bike, 26.2 mile run).

In 1993, Steve won a lottery entry into this race at a time when the legends in the sport were the top contenders.  Mark Allen won that year; other 1993 participating legends included Paula Newby Fraser, Ken Glah, Mike Pigg, Scott Tinley and Juergen Zack (Steve coached Juergen in swimming years later).  Steve's overall time was 11:41:43 with a 53:52 swim, 6:08:29 bike and a 4:39:42 run.  He placed 892 out of 1353 world class athletes.  This, in spite of having two flats on the bike and having to wait for the roaming repair van to bring him a new wheel on the course.  Steve was in top condition for this event, but, even though he had mechanical issues, he still persevered to the finish and used this experience to share with athletes he coached that it is not necessarily how fast your times are, but rather how to continue on in spite of adversity and to deal with the cards you are dealt on race day that are not necessarily in your control. 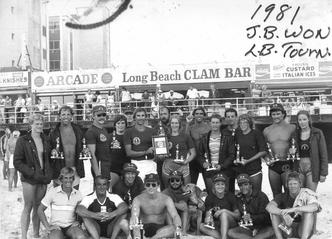 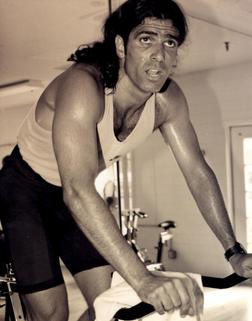 Recently, I found a heart-felt quote posted by Tom Rudd, shortly after Steve passed away on March 15, 2015 and thought it appropriate to re-post it below on the second anniversary of Steve's passing.

In just a few sentences, Tom summarizes the impact Steve had on so many people.  Tom worked with Steve as a photographer on various projects for Steve's company.  One of my favorite memories was in 2008  when Tom came to Heckscher Park (one of Team Total Training's cycle training spots) to photograph the team.  I had a vision to design a team cycle jersey using a photo of the team with them wearing their current cycle jerseys while riding in a peloton.  It was a great concept, but it was something that was difficult to execute, especially since some of us (me to name one) did not like to ride close to other cyclists LOL.

"In March of 2001 I met Steve Tarpinian. Steve would teach me how to reach deeper and push harder than I had ever done before, and he would do it all with a huge smile on his face. Steve was then my swim coach and soon to be triathlon coach and more important than that...he would become a great friend.

This week Steve Tarpinian passed away leaving a big void in the world of triathlon and a even bigger void in the hearts of the people he touched in his life. The things Steve taught me were more than triathlon skills, they were life skills, like helping others, being patient, and learning how to enjoy the ride by appreciating the little things along the way.

He will be greatly missed.May the waves be small and the wind always be at your back my friend...RIP"

As I have commented in previous posts as well as in Slipped Away, Steve's mission in life was to help people.  I believe this desire(along with his love for the water) was why he became a Jones Beach lifeguard in 1979.  Not only was he a great swimmer, Steve was an exceptional lifeguard.  He had the ability to spot people who were struggling in the water even before they themselves knew they were in trouble.  Not being a swimmer myself, I always felt safe and protected whenever I was in the water with Steve.  He was my lifeguard not only in the water, but on land as well. 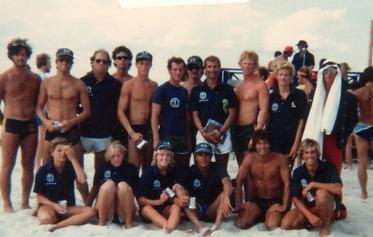 By chance, I put the words from an Avril Lavigne song to this photo. Ironically, the picture was taken in Miami in the beginning of 2013, when Steve really did start slipping away. We were there for a 2013 annual planning company meeting with some of his employees. Steve was struggling so much at this meeting. Although he hid it well, I am sure no one else with us in Miami, even knew how troubled Steve was at this time, or if they did know, to what extent. 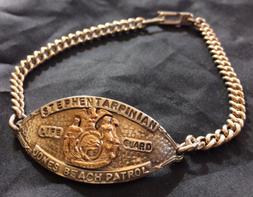