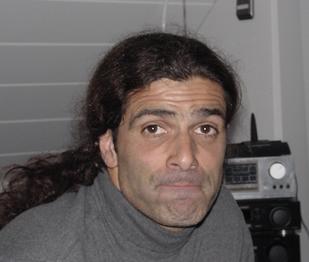 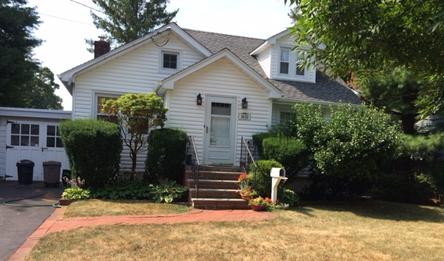 Mike Barth was a good friend of Steve's going back over 15 years.  Mike is a pilot for Lufthansa and Steve and I were always impressed with the skills required to fly these big passenger jets until Mike explained to us that it was really very simple.  There are 2 buttons for the pilot to press, one says "house big" to press when coming in for landing and the other says "house small" to press when taking off.  Mike had some fun memories of times spent with Steve that he shared with me:

"We set up a habit when it comes to 'who pays for dinner?' or 'who treats who?' As we never agreed with each other when we had to pay for drinks or dinner, one just paid the bill and the other had to accept. But because neither of us liked to be the one who was the non paying guest, we just hid the money we didn't have to pay (because the other was faster with paying the bill) in the belongings or house of the other one. So the funny moments were when Steve or I found some money in our clothes or hidden in the house weeks after we had eaten out together. That always brought a big smile to my face and let me remember the times when we discussed who takes care of the bill. There is probably still some money hidden in our houses.

Another time we had a discussion about Easter. I was complaining that all the big chocolate bunnies are hollow and so you get only a little chocolate for a lot of money. Steve took this complaint as a challenge and promised me he would find a massive chocolate bunny for the next Easter.  We made a bet, worth $100 and I lost.  The following year Steve brought me huge solid chocolate Easter bunny. That was the most  expensive chocolate bunny I ever had, but it was worth the fun." 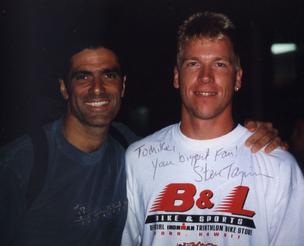 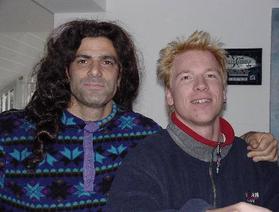 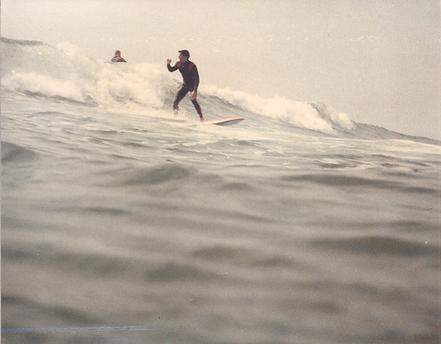 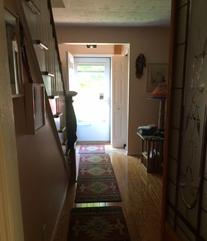 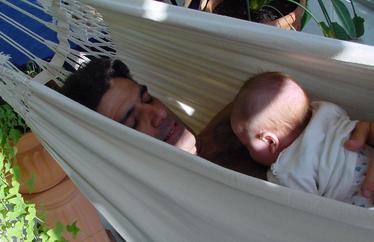 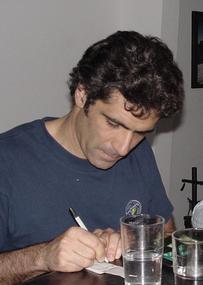 Bathroom with a view

I forget the story Steve told me about the autographed photo. Something like he was in a surf shop in Hawaii and either the owner of the store or the actual pro surfer was in the store at the time Steve was there and all remarked how much it looked like Steve.

In 1988, Steve and I bought our first house.  Prior to purchasing it, (it was at the peak of Long Island real estate pricing), we put over 30 miles on the car looking for homes for sale in our chosen neighborhood.  We finally found a house under $200K, (unheard of at the time) but it needed a lot of work; new kitchen, new windows, new doors, new hot water heater, etc. in addition to the normal cosmetic fix-ups.  As with most major decisions in his life, Steve struggled with this house purchase.  I remember our first night in our new home, laying on the floor in one of the empty rooms and arguing since Steve wanted to put the house back on the market ASAP and was suggesting we move into a rental. Our romantic vision of being "first time happy home owners"; eg; our first night in the home spent eating pizza by candlelight while we sat on boxes, never happened.

I was adamant we stay in the house and make it work.  So we did, and spent the first few months cleaning and dealing with construction.

Some of the funnier stories about our house that come to my mind all revolve around bathrooms.   When we first moved in, the only room that did not require work was the one and only bathroom.  I was not too fond of the green color scheme, however, it was functional and something we could live with.   During the first few weeks in our new home, we had the rugs cleaned.  All of a sudden, I heard a crashing noise.  The carpet cleaner was filling his pail with water from the bathtub.  He had leaned against the tiled wall to balance himself and his arm went right through what turned out to be a rotted wall.  Luckily, he didn't hurt himself. So, now we had a good reason to re-do the green bathroom.

My last bathroom story relates to us putting  in a second bathroom.  Whenever we had guests stay at our house over the years, they would sleep on a futon in our living room and share our one bathroom.  For years, I tried to convince Steve that we should half dormer the upstairs to put in a second bathroom and guest area.   Steve was generous to a fault sometimes, however, he was also very frugal.  Me, on the other hand, although not a big spender, believed that sometimes one had to spend money on worthwhile home improvements.

More than once over the years, when things "broke" in the house, Steve and I always commented to each other; "We have no business owning a home" as the two of us were clueless most of the time when it came to repairs.

The house we bought back in 1988 never became our "dream house", but we eventually made it our own and I have many happy memories of time spent there with Steve. 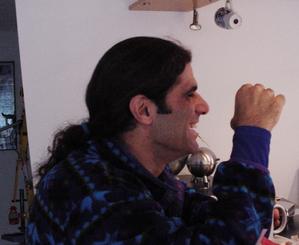 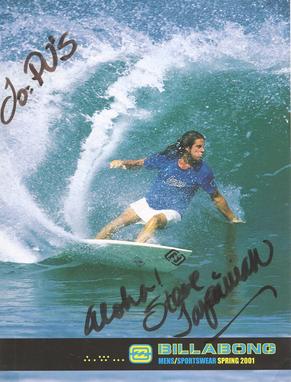 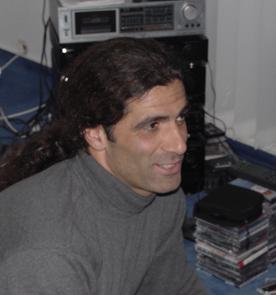